Mamani was born in Buenos Aires, Argentina in 1973, where she graduated from La Scuela Nacional de Bellas Artes Lola Mora. She developed her passion for sculpture at the University Prilidiano Pueyrredon, Buenos Aires, where she was mentored by Daniel Fiore. In 1997 the artist moved to New York to study at the Art Students League, where she remains today.
Mamani received an Honorable Mention for sculpture at the XI Salon de Estudiantes at the Avellaneda Institute of Fine Art in Buenos Aires, I992, and an Honorable Mention at the 2005 Jury Show at the Art Society of Old Greenwich (CT). Her work has been featured at the Gallery of the Banco de la Cudad de Buenos Aires Foundation (1989), the Student Salon of the Argentine Association of Sculptors Artes I (1990), Centro de Estudios Municipales (1994), the Java Studio Art Show (2006), and at several recent Open Studio tours at Crane Street Studios, LIC. This is her first exhibition at Susan Eley Fine Art. 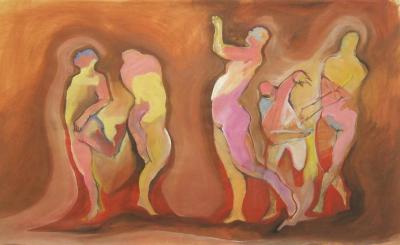